The cold, wet winter months are hopefully now on their way out and we can look forward to lighter evenings, warmer weekends and a little more sun!

At this time of year we often begin to think about spring cleaning and even the dreaded redecoration! Have you found unsightly patches of mould have popped up on walls or ceilings over the Winter months? Then we have a handy how-to guide for getting rid of mould.

If you have mould growth on painted surfaces like walls and ceilings the thing NOT to do is just to paint over the top to hide it! This will essentially be a waste of time as the mould will continue to grow and will soon show through your new paintwork. This will result in a waste of time and money.

The best course of action is to treat the mould to kill it and this process is simpler than you may think.

Using Mould Action to get rid of mould 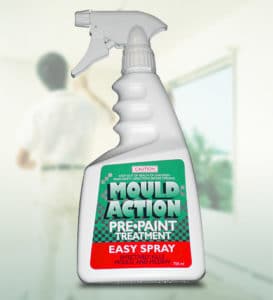 Mould Action is an effective mould and mildew cleaner which should be used before re-painting. It is simple to use and rather than simply stopping the growth of the fungus like many other fungistats, Mould Action actually eliminates fungus and bacteria present on all surfaces.

It is non-corrosive and does not contain either ammonia or formaldehyde and is biodegradable.

To apply, simply spray, wipe or brush the Mould Action over the entire surface to be painted. It’s important to treat not just visible mould as there will also be fungus present in the areas surrounding it.

Then allow it to remain on the surface for 24 hours in order for it to penetrate.

After 24 hours just rinse, wash or brush off all bacteria residue and allow to dry thoroughly. 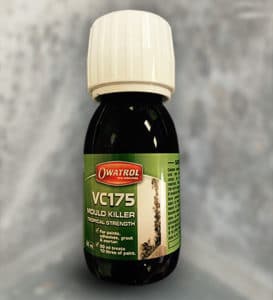 In order to prevent recurrence of mould, especially in damp or humid conditions, we recommend adding a small amount of VC175 Mould Killer to your paint when re-painting after using Mould Action.

VC175 Mould Killer is a powerful and long-lasting mould killer. It provides long-term protection against unsightly and smelly mould.

It can be added to a wide variety of  products; such as paint, timber stains, textured coatings, grout, mortar and adhesives. To use VC 175, simply add to your paint in the quantities listed below and apply the paint as directed.

3 thoughts on “How to treat mould on walls and ceilings”